In 2008, the Republican presidential nominee, John McCain, was blasting John Mellencamp songs at his rallies, until the musician asked him to stop.

Mellencamp is a Democrat. “We said, ‘You understand what side of the political landscape Mellencamp is part of, please know his music is for everybody,’” said Mellencamp over the phone from his Indiana home. “But we said, ‘You might want to relisten to these songs.’”

McCain stopped playing the songs at his rallies, many of which were taken from Mellencamp’s 2008 album Life, Death, Love and Freedom. Now, the album returns to the spotlight for its 10th anniversary at the musician’s forthcoming solo exhibition at ACA Galleries in New York, which opens on 26 April.

Life, Death, Love and Freedom features more than 25 new political paintings that reflect on the past to see the present situation. “I thought the album approached a lot of different emotions and feelings in the human condition,” said Mellencamp, “and that these paintings did, too.”

The 66-year-old artist and musician may be known for his hit singles like Hurt So Good from the Footloose soundtrack in 1982, his former days as “John Cougar” or for co-founding the Farm Aid benefit concert series with Willie Nelson. But all along, Mellencamp has fuelled his activism into his paintings.

Just as his songs from 2008 dealt with injustices (like the song Our Country, where he calls on the government to “help the poor and common man”), the paintings do here, too. “Some of the songs are more attuned to today’s world than when I wrote it,” he said. “But you have to keep going.” 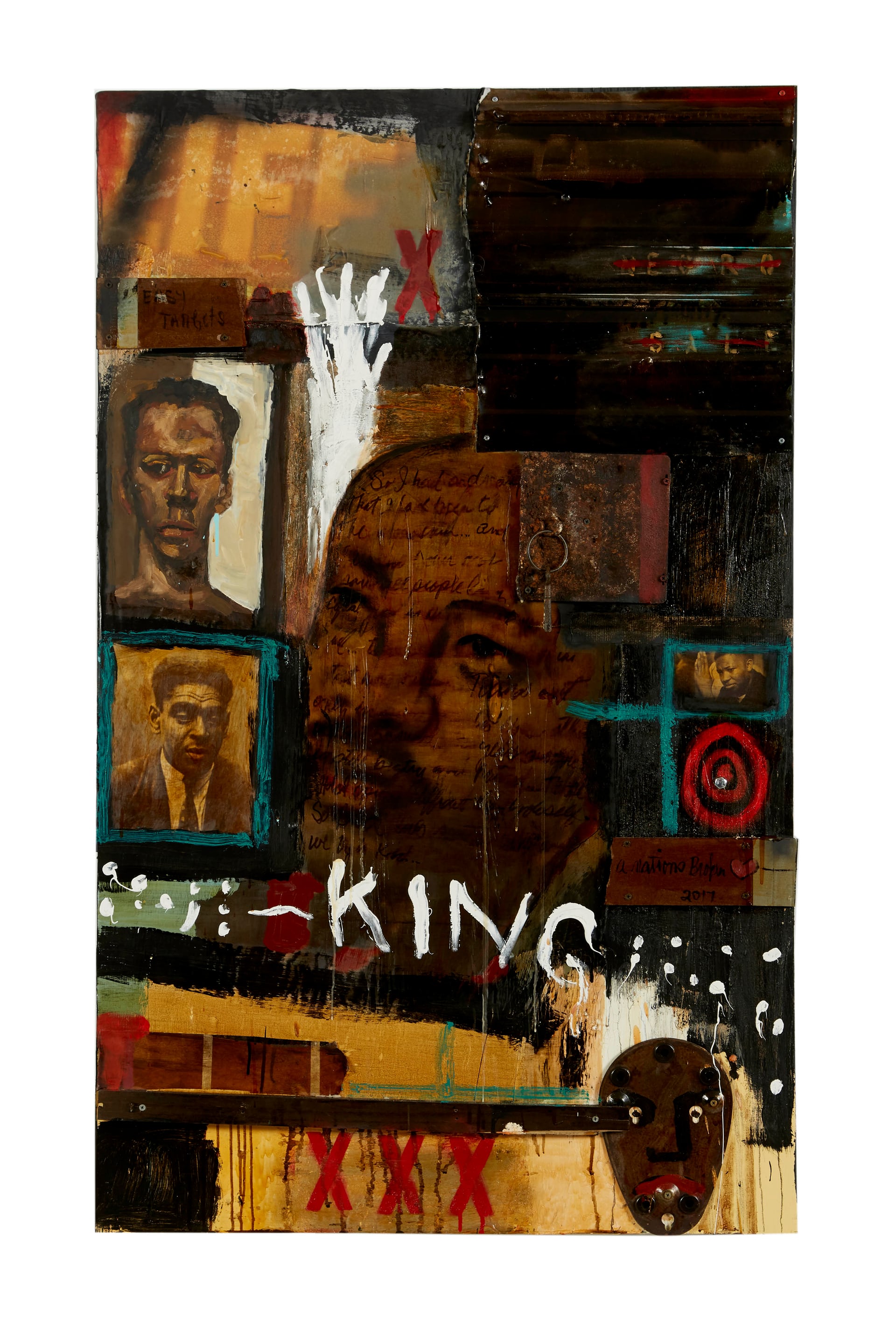 There is one piece in the show called Easy Target, which is a portrait of Martin Luther King. It references a song of the same name Mellencamp wrote last year from his recent album, Sad Clowns & Hillbillies. As one of his most political ballads, Easy Target is a song about Black Lives Matter and gun control in America.

“People say, ‘You can’t change the second amendment!’ and I say, ‘Yes you can, that’s why it’s called an amendment,’” said Mellencamp. “It’s already been changed, that’s how it got there. And if they don’t change the laws here pretty soon, I’m going to buy a tank and set it out front of my house because I need to protect myself … really? Stupid.”

You can hear the sharp anger in his voice when Mellencamp talks about gun control. “The National Rifle Association says guns don’t kill people, people kill people – bullshit,” he said. “Guns were made as weapons and are meant to kill people, that’s what the fuck they’re any good for. Any other argument is just bullshit.”

It ties into one new artwork in the exhibition called A Drawer Full of Bullets, which is a sculpture composed of found bullets and cotton in a wooden drawer. The artwork is centered around a Martin Luther King quote, which reads: ‘In the end we won’t remember the words of our enemies but the silence of our friends.’ “If you want to follow oppression,” said Mellencamp, “follow cotton or sugar and you’re sure to find it.”

As a young artist, Mellencamp first arrived in New York in the 1970s to attend the Art Students League, but got a record deal and went on to make his first album, Chestnut Street Incident, in 1976. His art was left on the sidelines.

After touring with his band for over a decade, Mellencamp wanted to take a break from playing live and returned to painting in 1988. “By then, I started to withdraw from the touring lifestyle as much as I could,” he said. “I took myself out of that game of being a hit-maker and started to let my creativity go wherever it went.”

He returned to the Art Students League and studied with a painter named David Leffel, who taught him the tricks of Old Masters, then studied at the Herron School of Art and Design in Indianapolis with a teacher named Jan Royce. That was when Mellencamp began finding his own voice with the paintbrush. “There are certain rules to paint a face and give it depth and learn about the magic of oil paint. I didn’t know any of that stuff,” said Mellencamp. “After I learned the lessons of portrait painting, I took it someplace else.”

Mellencamp is influenced by German expressionists such as Otto Dix and Max Beckmann, as well as American figurative painters like Walt Kuhn, Marvin Cherney and Jack Levine. He never thought about showing his art until his friend Bob Dylan saw the hundreds of paintings piling up in his Indiana studio. Dylan suggested that he sell the paintings in an exhibition. After having countless exhibitions in museums and galleries across the country, Mellencamp is known for his portraits of unknown characters and people in his life, like his ex-wife Elaine Irwin, his children and current partner Meg Ryan (one of which is in the Rock & Roll Hall of Fame in Cleveland). 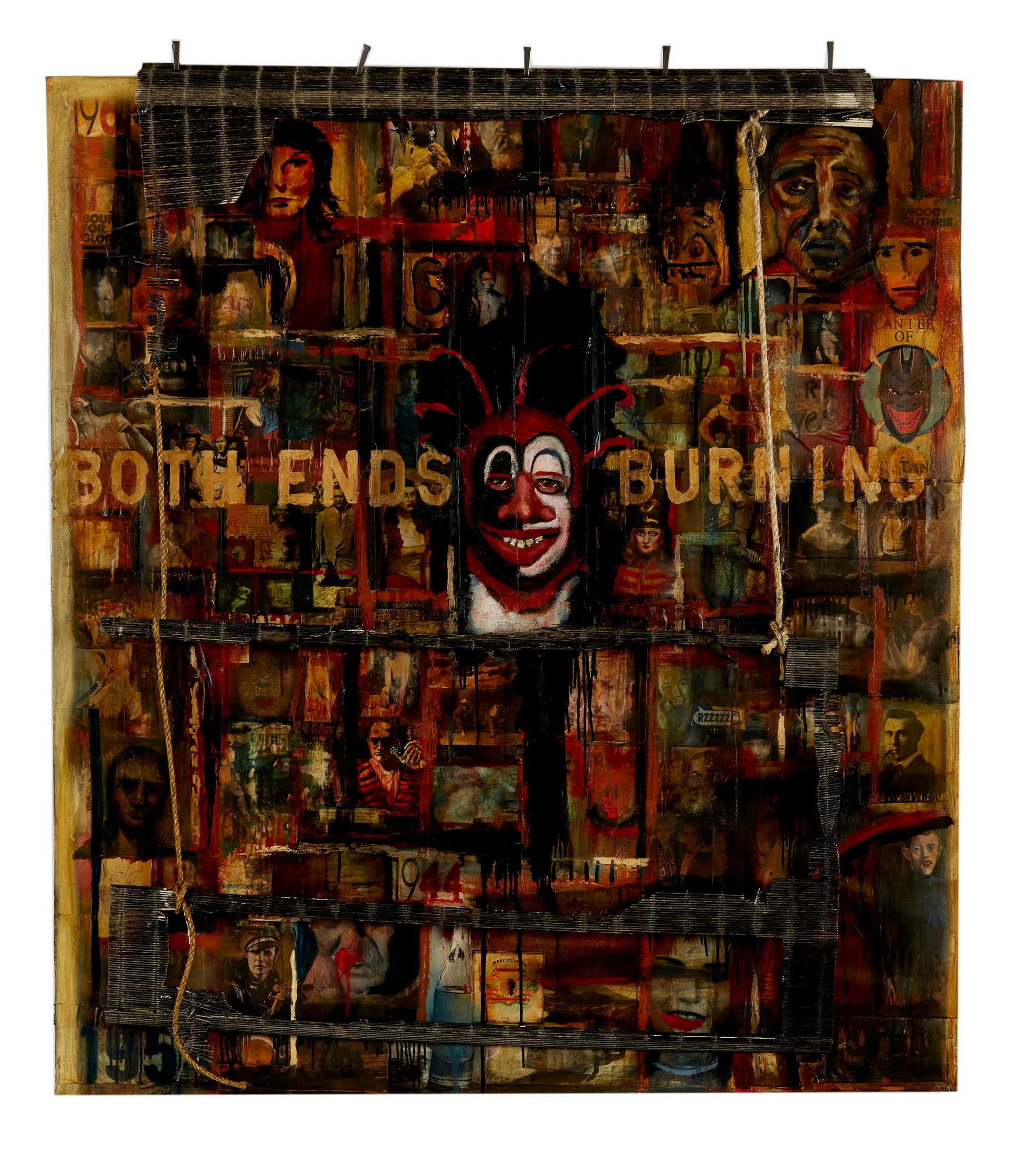 “There’s nothing closer to heaven than painting,” said Mellencamp. “That’s as close as you get, you’re totally released to your imagination and you can’t edit your imagination. It took me a long time to come to that conclusion. I think my songs and paintings reflect that.”

Some of the new paintings include Courage, which has a series of dreamy figures wearing top hats and vintage clothing. They’re accompanied by a quote he wrote, which reads: “Courage is when you know you’re licked before you even start and see it through to the end.” It’s like a little reminder to Mellencamp – and perhaps anyone who sees the artwork – to always keep pushing.

“I don’t really paint for any other reason other than myself,” he said. “I paint pretty rough paintings, I try to keep them raw and primitive. They’re like my songs: grotesquely beautiful.”

His melancholic characters do have a spooky feel, and if any artworks were a personification of the blues, this could be it. But does Mellencamp agree? He pauses.

“Well, it takes a troubled heart to raise a troubled man,” he said with a bit of a twang in his voice.

When he isn’t giving a rare interview, Mellencamp claims to live on his own schedule, and poetically so. “That’s what living is,” he said. “You scratch your head, you whistle, you kick a can, do a painting, write a song, watch the news, you go to sleep and nobody is in charge of your time except you.”

“I have been very fortunate that I’ve been my own boss since I was in my early 20s,” said Mellencamp, “so I’m really lucky.”

John Mellencamp: Life, Death, Love and Freedom will show at the ACA Galleries in New York from 26 April to 2 June